Change is Natural, Collaboration is Next

After a long absence, I am returning to this blog because of some changes in personal philosophy and developments in the emerging Internet of Things and Networking spaces. I have been developing wireless mesh networking algorithms, software, and products for 16 years as MeshDynamics, drawing on my lifetime experience in real time embedded systems, robotics, and wireless networking to create technologies uniquely suited to demanding outdoor environments.

MeshDynamics software, for example, is especially well-suited to the most demanding outdoor environments requiring the highest performance over many hops, in motion, and/or for high throughput and low-latency applications like voice, video, and real-time command and control. Because my networking software is abstracted and isolated from the radio and other hardware, it may be optimized for use with any combination of radios, frequencies, and device configurations. Much of my software has been re-written based on open-source packages like OpenWRT to speed integration.

Integrating networking into others’ products

Post-2014, we shifted our emphasis from building products to providing source code licenses and working primarily with OEMs, Embedded Software Developers, System Developers, and major agencies to integrate our software into their devices and solutions. To this end, MeshDynamics has created an open-source-based suite of software modules, source code included, intended to be incorporated into "things": robot drone swarms, mesh nodes, Internet of Things hubs, etc. 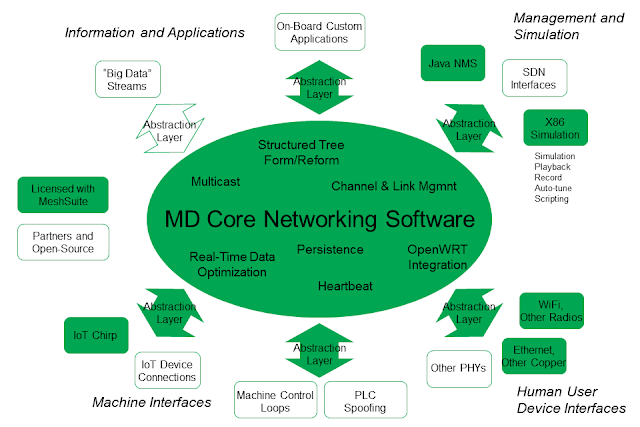 We are now seeking partners ready to test this source code base for a fit with their own offerings, just as organizations as diverse as Sharp, PGA Tour, mining OEMs, and the US Navy used the software currently and in the past.

Back in 2002, when I began architecting "wireless" switch stacks, I was developing algorithms based on my judgment that radios would become cheaper and that enterprise networking environments would become more complex. The last mile needed more than single-radio, MANET based access points and obsolete hub-like mesh architectures.

This has proven true, but over the last few years I have realized that scaling to the large numbers and dynamic network configurations required by swarms of drones or self-driving cars, etc., represents an unprecedented challenge.

Unprecedented in traditional wireless networking -- but not in nature.

So in recent years, I am using the communication principles that have emerged over millennia in nature to inform my networking development. Some of this thinking is reflected in the book Rethinking the Internet of Things, which I wrote with the help of long-time friend Byron Henderson. We drew on our combined backgrounds in networking, robotics, embedded systems, and biology to describe an architecture for the IoT that builds on lessons from the way nature deals with copious tiny “signals” -- from pollen and birdsong on up. Industry interactions and the developments in drone technology and Artificial/Augmented Intelligence are causing me to expand the biological approach to network topology once again.

Metaphors by themselves can be misleading, but building on actual principles developed by nature over millions of years of evolution yields insights. The key driver of all biological existence is propagation – placing as many of an individual’s genes as possible into future generations. In that process, the environment exerts a pressure through natural selection that leads to the best-adapted individuals leaving more offspring. This creates the illusion of progress in evolution, as successive generations become better adapted to conditions over hundreds of thousands or millions of years. Sterile hybrids, such as mules, leave no offspring and thus are not refined by this environmental pressure.

Robotic drone swarms have a similar drive to propagate inherent in their design and programming. But this propagation is of data and information related to their mission. Adapting to their local physical and radio environments, they only survive and carry on their mission through communication (messaging) – with other devices in the swarm, and with command, control, and big data analysis functions at some distance.

Interconnected drone robots may adapt more quickly to their environment than living beings.
So the “generations” pass in seconds rather than millennia – but only if the communications paths are persistent and resilient, even reforming after interruptions. And the devices may learn and pass on information from the environment – a process mirroring human cultural evolution, which proceeds much more quickly than can biological evolution

This concept of swarms of adaptive robotic individuals communicating wirelessly in a rapidly evolving topology is top-of-mind for me now as I develop new networking algorithms for use by OEMs, agencies, and System Developers. Demanding outdoor environments requiring mobility, low latency, large hop-to-hop counts (as in mines, tunnels, or a long string of drones), and high throughput are the most likely to need these developing capabilities.

A delicate balance is needed between individual autonomy, learning and the ability to externally “bias” the network for better efficiency of aggregated devices. Biological evolution similarly acts on individuals – but aggregations of individuals may better survive through common adaptations. This is seen in human society as well as “super-organisms” such as ants and bees. Networks not inherently driven to learn, propagate, and evolve are the mules of the wireless world – and thus have no future.

Networking technologies have evolved: from the strict topologies of Token Ring to the shared backplanes of hubs, to dedicated switched ports, and now to wireless.

I believe that the next phase will be driven by independent but interconnected machines responding to environmental pressures and the "mission" bias to rapidly evolve their internal networking topology.

I am interested in talking with those who are intrigued by these ideas and wish to work together on developing solutions for dynamic networking environments of today and the future. Contact me via my website to start a conversation.

Posted by Francis daCosta at 5:26 PM