Critics from the Past – Smarter Simulation

The previous three posts described work done, starting 2002, in building mesh networking products and devising a truly scalable architecture for the Internet of Things (IoT). One other area of interest dates back to 1992. The problem I was working on then was auto-programming robots: leveraging Artificial Intelligence-based reasoning tools to critique and collaboratively flesh out skeletal robotic assembly strategies.

The “Critics” system developed at that time first modeled the (virtual) robot environment, and then progressively refined it with (real) robot sensor feedback.

Today, simulation systems model large networks and I was tasked with developing one such system to validate a wireless mesh network design of ours. I could have focused on two different things: model the Finite State Machine of the wireless “robot” interactions; or simulate the RF channel and link quality of the RF transmitters. I needed both to do this project justice.

So we developed a framework to run exactly the same firmware image that runs on the embedded devices for an x86 desktop platform. Only the RF characteristics must be estimated for the model (the physical nodes are constantly measuring and analyzing real-world RF). The rest is operating in the simulation exactly as in the networking devices themselves – and vice-versa. 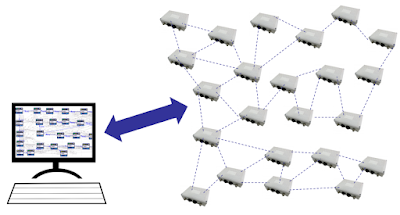 New processors, new radios, different environments – all may easily be accommodated in the simulation. Our OEM and System Developer partners are assured that their next-generation Structured Mesh™ products still work. MeshSuite™ does not "model" their embedded device software – it is their embedded software, running on a desktop (x86) target platform.

In addition, the software may be moved back and forth between simulation and the physical network. It only needs to be tuned in one environment or the other – ideally, they move together in lockstep. This is engendered by the Abstraction Layers built into both the networking device software and the simulation – the core networking strategies and State Machines don’t change. Different channels, different network goals, different embedded user applications – all are accommodated.

Combined with the autonomy of the nodes, this gives us something like a Mars Rover situation: we can create a mission-level strategic plan for network tree topology and count on devices to execute those tactics to accomplish it without further ado.

And we can run multiple different scenarios in parallel in the simulation without reconfiguring physical nodes for every test, rapidly prototyping the environment under different conditions - as in genetic algorithms.

Once again, this approach is informed by Nature. Individual ants operate on a very simple “If … Then … Else” decision tree, biased by pheromones from the Queen and their nest mates – and it scales. They are all driven by the same very simple “Operating System”, so the overall actions of the colony are nearly optimized from an external view.

By developing the simulation and network operating software identically and basing it on collaborating Critics, we achieve both resilience and high performance – and can scale up or down. We have only scratched the surface of what may be accomplished with an interested OEM or System Developer partner. Reach me via my LinkedIn page or website.
Posted by Francis daCosta at 5:40 PM